"The Space Economy" is a blog that is dedicated to not only recognizing the technological development of space but identifying where those technologies could be commercialized in the growing private space industry.

In order for a space industry to flourish, there cannot be one company or two companies in it, no single company has the resources required. There has to be an entire spread of companies all supporting and interacting with each other. The ones that make space suits, the ones that haul cargo, the engine manufacturers. These companies must be created to build a foundation for all future space exploration and colonization. But many wonder "Well what needs to be created in the space industry?" This blog is meant to deliver a few possibilities and identify the hurdles involved with them. We want to help spark ideas for new companies in a new industry.

But a bunch of companies making space suits won't alone be useful in the future space industry. For space to be a successful human endeavor there must be an economy set up within it. The economy of space will most likely be quite different from many economies we are used to on Earth. There will be a lot of questions to answer. How does one create a return both for the supporters on Earth and the risk-takers/workers in space? How will money be exchanged? What will be the money? What legal ramifications are there? These are all issues with the privatization of space and the development of a space economy that we will venture to answer in this blog.

Space today is what the Americas were in the 17th century. It is unknown, unexplored, dangerous, and expensive. But we know that there are resources out there and vast potential. But we haven't yet figured out how to, quite simply, make money from it. "The Space Economy" is an early step toward presenting the businessman and the engineer with the commercial possibilities of the new frontier. 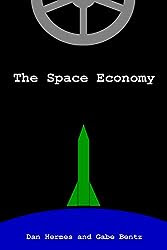